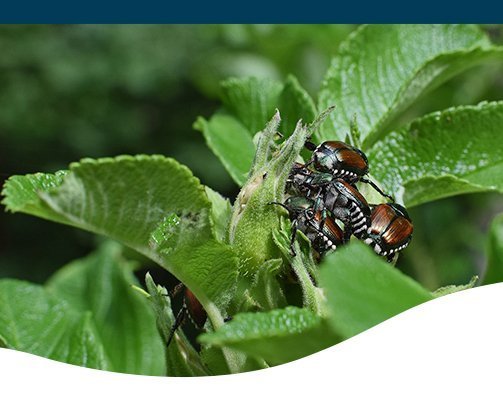 “Never stop fighting till the fight is done.”
– Eliot Ness

We put time and effort into our gardens to create a beautiful backyard space that we are proud of. It can be heartbreaking to see all that work disappear before our eyes. Whether it’s from extreme weather or pests, we do our best to protect our gardens from being damaged.

Many modern pesticides are pretty effective against nasty insect invaders without being too harsh on our beloved plants. However, there is a growing list of pests that seem to be completely resistant to every pesticide in the book. Among these seemingly invincible pests, especially in recent years, is the Japanese beetle.

Japanese Beetles in the Garden

As their name suggests, Japanese beetles are not native to our Iowa soils. These pests likely stowed away and travelled here from Japan, and have managed to become a problem for gardens everywhere since. They seem to attack out of nowhere, drawn in by the sweet fragrances we love in the garden, like raspberry, roses, or maple, and when they arrive, they will terrorize your garden.

The beetles themselves are easy to identify. If you can’t diagnose your garden problem from the damage they leave behind, their bright green metallic heads and copper bodies are a unique give away. The adults devour leaves to petals from the outside in. They don’t eat the veins though, so they leave behind disappointing and ugly skeletons of their meals. The larvae present a different issue, as they are so desirable for burrowing animals that the presence of Japanese beetles is likely to invite them to dig up your garden in search of a snack.

Why They’re So Pesky

Japanese beetles can cause tons of damage to your garden if they go unchecked, but the problem is they are incredibly resilient to pesticides. Their shells are so thick and hard that they are shielded from nearly all pesticides. The few pesticides that have been shown to work on them are so toxic that some have been pulled from shelves!

It’s impossible to sit and watch your pretty perennials and beautiful blooms get devoured in front of you and just do nothing. With the normal treatments of pesticides and chemicals proving to be ineffective, it’s time to outsmart your beetle invaders instead.

Love what you’re reading? Sign up to our email newsletter, and get inspiration delivered straight to your inbox.

Despite their thick armor, there are a few methods that have proven effective against Japanese Beetles. When it comes to tackling these pests, here are a couple of products we carry that will help take care of an infestation:

Japanese Beetle Traps are one of the top-selling defenses for these bugs worldwide. They use a carefully crafted combination of pheromones and floral scents to attract the beetles. With the promise of food and mating, they are easily lured into a bag or box from which they can’t escape. These traps are simple to use, usually just requiring a quick setup and placement. Place them on the perimeter of your property as the beetles will often forage on anything in their pathway to the trap. Empty them regularly to keep them working effectively.

Bonide Eight Insect Control is another product we carry that we have found works against Japanese Beetles. It is an insecticide based with permethrin, a pesticide that has proven effective against over 100 insects that commonly plague gardens and yards. Simply measure and spray as directed and watch the pests disappear. As it is a pesticide, though, remember to use sparingly, or you could see your beneficial bugs disappear with the bad ones.

Japanese Beetles can cause a lot of garden stress, but with the right tools you can make quick work of this pesky pest. For more tips and tricks battling Japanese Beetles, visit the garden center today!

We will be closed July 3rd & 4th to observe Independence Day.